The journey begins in Costa Adeje in the south-west of Tenerife. Costa Adeje is a very beautiful coastal section on the Atlantic Ocean. The coast has partly rocky shores but also beautiful sandy beaches. The water temperature varies very little, so you can swim all year round here. In clear skies you can enjoy beautiful sunsets in the evening behind the scenery of La Gomera.

From the coast we continue to the Teide National Park in the middle of the island. The national park is located at an average altitude of 2000 m. It is the most visited national park in Spain. In this volcanic high mountains the air is somewhat thinner, but very clear. In the Caldera Las Canadas grow some rare plants like Echium wildpretii, which is only found here. But the highlight is Mount Teide, the highest mountain in Spain and on the islands of the Atlantic Ocean. Its summit at an altitude of 3718 m you can also reach by cableway. The Teide National Park was declared a UNESCO World Heritage Site in 2007.

We continue to the Masca Gorge in the north-west of Tenerife, which impresses on a hike with a breathtaking landscape. The gorge is named after the mountain village Masca in the Teno massif. The village lies at the head of the Masca Gorge. From here it is 8 km and 800 vertical meters to the coast. The tour ends at the Masca bay on the Atlantic Ocean.

On the last tour we visit the neighboring island of La Gomera. The second smallest island of the Canaries is enchanting with a unique landscape of laurel forests and evergreen ferns, reminiscent of past times. The laurel forest is located in the Garajonay National Park in the middle of the island. The forest is mostly covered in fog and is therefore also called cloud forest. Due to the humidity there is a lush vegetation of ferns, lichens and mosses. 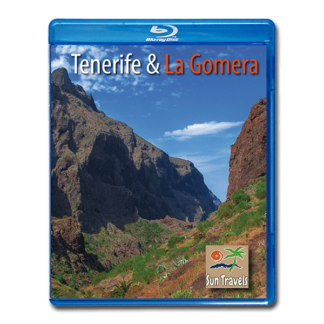 You're viewing: Blu-ray Tenerife & La Gomera € 7.14
Add to cart
Manage Cookie Consent
To provide the best experiences, we use technologies like cookies to store and/or access device information. Consenting to these technologies will allow us to process data such as browsing behavior or unique IDs on this site. Not consenting or withdrawing consent, may adversely affect certain features and functions.
Manage options Manage services Manage vendors Read more about these purposes
View preferences
{title} {title} {title}